The Portraits
History of the portraits 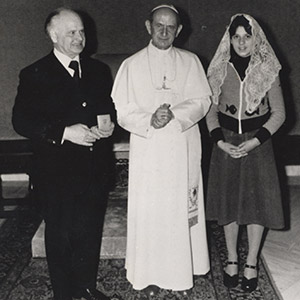 August Kunst was born on 25.11.1914 in Königssteele in Essen. Because of his passion for art from an early age (coincidentally his surname “Kunst” is German for “Art”), his uncle registered him with the Folkwang School of Arts in Essen when he was fifteen. At the time August Kunst was the youngest student there ever. The first semester was paid for by his uncle, and for the following six semesters he absolved at the school he was granted scholarships. Thereafter he passed the qualifying examinations of the Düsseldorf Art Academy.  In 1933 though, due to political and financial reasons, the continuance of his studies was no longer possible.

1937 August Kunst started his training to become a police officer.  Notwithstanding this change, art continued to be his true passion and this never changed up to a high age. Due to an occupational disease he was released from the police service into early retirement at the age of fifty.

He laid the focus of his attention on portrait drawings, which he rendered in incredibly perfect precision. In the process he developed a unique technique of strokes and smudging with Siberian charcoal and a special kneaded eraser.

For his works of art he chose personalities whose biographies or achievements in life moved him. He occupied himself intensively with his current subject for months. In the absence of the live model he worked his portraits from photographs.  »Mere “copying“ does not result in a portrait: „One has to capture heart and soul, to empathize with the human being. Of great importance are the eyes, since they give testimony of her or his character.«, thus August Kunst. For the drawing of a portrait the artist took some four-and-a-half months.

His relentless aim was to be awarded with the personal acknowledgement by his subject in the form of a signature. With all of his artistic oeuvre and the gratitude and deference paid to him, his charcoal drawings are also testimony of an eventful life: an exceptional story that reminds us of an artist who was master in portraying personalities of his time and enthrall them in the course of their meeting.  Every encounter bears a moving tale within.

On 6. October 2008 – aged 93 – August Kunst died peacefully in the arms of his beloved wife Anna Maria and his daughter Marion.

For August Kunst meeting the artistic genius of his century, Pablo Picasso, was the highlight of his artistic life. After a long journey he was able to find artist Pablo Picasso in his second residence in Mas Notre-Dame-de-Vie Mougins in the vicinity of Cannes. The charcoal portrait of Picasso was handed over, and Picasso was so enthralled that he signed it, commenting that “he took it to be a photograph so exceptional was the likeness”, remembers August Kunst. It was the third of October 1964 – an inconceivable appraisal and acknowledgement paid to him by the artist of the century. This story went through the West-German newspapers at the time.

The artist August Kunst from Essen met the great philanthropist Albert Schweitzer. Professor Schweitzer not only honored his guest with an autogram placed under his portrait, but also invited him to dinner and to stay the night in his home. August Kunst also had to give his autogram: he was asked to sign himself into the guestbook of the house.

The countenances of their Holinesses too were immortalized in meticulous attention to detail in Siberian charcoal and led to a private audience for August Kunst and his daughter Marion. This extraordinary story began with the police-chaplain sending the charcoal drawing of Pope Pius XII to Rome. In a deferential accompanying letter he bid for the portrait to be presented to the Holy Father for his autogram. In Rome, the charcoal drawing was examined under a multitude of aspects. The head of the church was very much taken by the portrait as well as the covering letter. In clear lineaments he distinctly placed his signature under the drawing.

In the attempt to also present the charcoal drawing of Pope Paul VI for signing in Rome in 1969, August Kunst was informed: “the Pope does not sign pieces of art!” Nonetheless Pope Paul VI consoled the artist sending his regards to his family and placing an enquiry, whether he could have the picture as a present. When in due course the Vatican Gallery was opened, August Kunst decided to place the portrait at the gallery’s disposal. By the intervention of an order’s sister the donation came to be in 1976. Together with his then fifteen years old daughter Marion, August Kunst presented the Pope in a private audience with the piece of art. By now, the portrait of Pope Johannes Paul II is also displayed in the Vatican Gallery.

The once-in-a-century-event of the German reunification induced the artist August Kunst to present the then Head of State of the Russian Federation, Michail Gorbatschow, with a portrait of himself as a present, thus expressing his highest regard and acclaim for Gorbatschow’s pioneering of the German reunification. The then ministerial president Jürgen Möllemann facilitated the personal meeting with Michail Gorbatschow and the handing over of the picture in the Small Townhall of Münster.